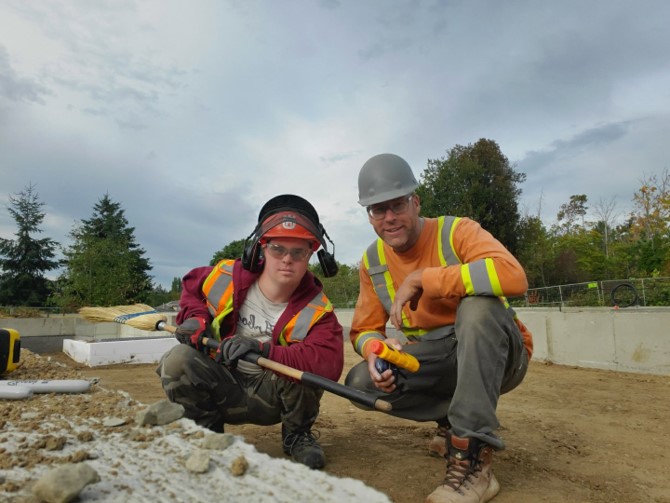 This was a pilot project to environmentally takedown by hand and reuse, re-purpose or donate the wood to Habitat for Humanity and other organizations.

This project helped employ many young adults in the community. Nolan’s responsibilities included removing nails from the wood and stacking wood – his job lasted for approximately 5 months, working 5 days a week – 4 hours a day.

Nolan at his demolition job

Once the demolition was done Nolan was let go but, Buddy his boss, promised to bring him back once the new build was well on its way to completion.

This job taught Nolan many new skills and responsibilities some harder than others but he had our support and his parents along with a very supportive work crew and he did his best.

Nolan is now back on-site at the construction job where he helps clean up the job site once a week on Fridays for 4 hrs and sometimes he runs into old teammates from his football team the Ballenas Whalers!

He has a great boss, Buddy, who helps Nolan on the job site.

His job starts very early but he loves it and we are all very grateful for this opportunity for Nolan!

Nolan with one of his workmates