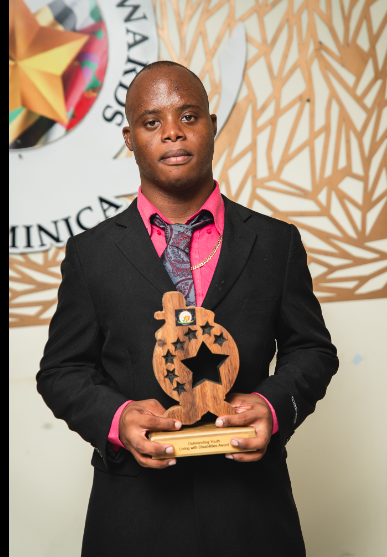 The awards celebrate the outstanding efforts of youth in and around Dominica.

Alistair Abel, a young man with Down syndrome was awarded ‘Most Outstanding Youth with Disabilities’.

Alistair is the only son of his parents. At a time when not many schools were accepting students with disabilities, Alistair was fortunate to be enrolled in a mainstream preschool, TC Sunbeam preschool.

He then transitioned to a mainstream elementary school, the Christian Union Primary School, where he learned many of his social skills.

He graduated from 6th grade and transitioned to the Achievement Learning Center where he continued to thrive.

By the time he graduated at 18, he could read basic sight words, knew his numbers up to 20, could write and spell his name and log in his name and time in the time log-in sheet.

He was given the role of school maintenance, a role he performed with excellence.

At 18 years old he graduated from the centre and was the first student with a visible disability to be transitioned into the workplace.

Alistair worked at Jolly’s Pharmacy for an entire year until the COVID -19 pandemic.

From all reports, he blended very well into the work environment and was an asset to the organization and had it not been for the pandemic they would have kept him.

When Alistair found out he was going to start working, he no longer came to school with his uniform shirt, but with his work shirt; however, when he got to school, he would put the shirt on a hanger and change into his regular clothes. He was ready for the world of work, and he demonstrated his readiness.